Tenerife – from the big tourism towns to the typical canary villages

Tenerife is multifaceted maybe even the multifaceted of the Canary Island or of all Spanish islands. This is not just because of the various landscapes from the Teide to the coasts but also because of the different towns and villages in the south and the north.

All started in San Cristobal de La Laguna, the former capital city of Tenerife. Nowadays it is popular for the untouched nature.
The mass tourism did not arrive in the town yet so it is nice to walk through the historical alleyways between churches and old building. Churches and impressive houses are good for sightseeing. The Casa Montanez got build in the colonial style, has a Patio with a wooden balcony and is definitively worth a visit.
The first University on the Canary Islands got established in La Laguna. Not only students go here to study, also families with children or young people are going to this town to learn and e.g. go to the science and cosmos museum.

Today Santa Cruz is not only the new capital city of Tenerife but also the administration town in the north-east. Every 4 years Santa Cruz and La Palma on Gran Canaria switch the duty of being the capital city of the Canary Islands. Santa Cruz is also the biggest city on Tenerife.
The suburban's for Santa Cruz blend into the town La Laguna. You can use the tram to get from the harbour of Santa Cruz to La Laguna.
Santa Cruz has some historical sights e.g. the oldest church of Tenerife.
A historical/ military memorial about the capture-intentions is the harbour with its fortification.

Puerto de la Cruz - A city in the Orotava valley

Puerto de la Cruz is a city in the Orotava valley. Due to the warm and wet climate the area is very green.
Puerto kept its personal charm even if the tourism becomes more and more.
The centre and some buildings outside of the city have a cultural meaning.
When you walk through the city, you will pass by churches, parks and historic buildings.
Besides restaurants, bars and cafés there are also building in the typical canary style.
One of the most popular attractions in Puerto de la Cruz is the Loro Parque. If you love water, you should visit the Lago Martianez, which is a sea water pool next to the coast.

If you just want to ramble about the city you should go to Buenavista del Norte. The town has due to the buildings a typical canary character.
The next beach nearby is Playa de las Arenas. Here are small pools created by cold lava - a nice way to refresh and not so often to be seen.
Right next to the boardwalk there is the sea water pool „Piscina Municipal“. Here you can also use a fitness room, a sauna and cafeteria.
Surrounded by banana plantation you can spend calm, quiet and relaxing holidays remote the mass tourism.
If you like to play golf, you can go to the 18-hole golf course which is approximately 2km underneath the town.
Buenavista del Norte is also a good starting point you want to go hiking in the Teno-Mountains.

La Orotava: Not only a village - a green oasis

The town La Orotava is located of around 400metre above sea-level. The area of La Orotava reaches from the Pico de Teide (heartland) up to the north coast of Puerto de la Cruz. This town has the biggest area of the Canary Island Tenerife.
The town itself is locates on the north-west coast near Puerto de la Cruz.
In this area is characterized by banana plantations and vineyard cultivation.
La Orotava has two main districts and both are in preservation of sites of historic interest.

Garachico - A village on a headland

The village Garachico is located on the north coast on a roundly headland created by dry lava.
In the beginning of the 17th century these mass of lava destroyed the old village and the harbour completely.
The old village got rebuild and today there are beautiful white houses with red roofs.
In the old town are a few churches and museums but also typical and good Canary restaurants.
In front of the coast there is the Roque de Garachico. According to the motto: to be as firm as a rock in the waves.

Icod de los Vinos – A town worth its name

The town Icod de los Vinos has many different kind of architecture of all centuries, especially in the street Calle San Sebastian.
The town hall got build in the 18th century but the church San Augustin is even older. The church got build in the 17th century and is a historical monument.
Icod is well-known for its good wine, that's why it has the Icod "de los Vinos". In this town you can go to one of the Bodegas and try some of the local wine.
But Icod de los Vinos is more than just a wine-growing area. Here you can visit further exciting sights. For example:
•    Dragontree „Drago Milenario“ in the Parque del Drago
•    Cueva del Viento – it has a length of around 14km and is the worlds longest volcano-tunnel/ cave

These are just a few interesting towns and villages in the north of Tenerife.

The cities Los Cristianos and Las Americas are located in the south and did grow together in the past years. They are the main touristic area in the entire south.
The boardwalk of Las Americas starts at the Costa Adeje and stops at the end of Los Cristianos. Along this boardwalk you will pass by wonderful white sand beaches.
Here you can relax in the sun or do some kinds of water sports.
You can also visit the Aquapark Octopus in the village San Eugenio Alto - fun for children and adults. Besides water slides and Wildwater Rivers it also has a dolphin show you can watch.
Another great water attraction is the Siam Park in Las Americas. The park is quite big and has many different kinds of water slides. It also has a river, an area for younger children and a beach with a wave pool.
The city Los Cristianos is right next to Las Americas and has its own attractions.
In Los Cristanos you can enjoy the wonderful beach „Playa las Vistas“ which is popular by the locals and the holiday makers. Los Cristianos is a welcoming and touristic city on Tenerife.
No matter is you want to eat in a typical Canary/ Spanish cuisine or in an international cuisine, here you will find something for everyone. Also bars and cafés, cocktail bars and discos.

Arona is a good starting point to go on hikes in the national park or along the table-mountain Roque del Conde.
The national park del Teide starts near the town Arona. Here is a wonderful place to go hiking.
The coast of Arona is a bit further west of Los Cristianos and provides many different kinds of sporty outdoor-activities. Starting with the water sports, ending with tennis. Who wants to get an adrenalin rush could drive to the neighbour town Adeje and do paragliding.
Within a distance of around 15 kilometre of Arona there are the great beaches Playa las Vistas, Playa Las Américas, Playa Fanabe and also three golf courses.

Adeje - A village and a town

Adeje is a village and a town at the same time. The town Adeje has thanks to the location around 3000 hours of sun every year. In the middle of the green natural reserve but also at the coast the town has an average temperature of around 23°C. Perfect conditions for a wonderful vacation.
Around the popular Barranco del Infierno Adeje has very productive land. Even the Guanchen (natives of Tenerife) did know about it a long time ago.
Some of the old traditions are alive e.g. the feast and play on Good Friday or the thanksgiving also called Romeria.

Costa Adeje – A town with luxury villas and golf courses

The districts Fañabe, Torviscas and La Caleta are located on the Costa Adeje and belong to the town Adeje. Today it is one of the noble areas.
You could almost say that the places Costa Adeje and La Caleta grown together like Los Cristianos and Las Americas. The „Golf Green Adeje“ is one reason for this which is actually located in La Caleta.
The large area of the golf course is surrounded by villas and noble hotels.

Arico – A town from the south coast up to the mountains

The town Arico is located approximately 45 kilometre south-west from Santa Cruz. It grew together out of different small villages e.g. Arico Nuevo and Villa de Arico, both in the mountains.
Due to the typical canary architecture, the town is protected.
Arico is a popular location for climbers but also to relax.

All important "Towns and villages" on Tenerife

Here you can find the perfect accommodation for a good price!

Towns and villages
to table of contents 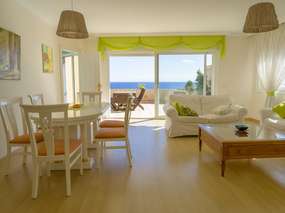