El Tanque, situated in the north-western Teno mountains on Tenerife, is a paradise for outdoor enthusiasts and holiday makers seeking for quiteness and the beauty of nature. It is a quite and traditional mountain village which has kept its authentic charme and tradition. Around 3000 people are living in El Tanque, which belongs to the constituency of Isla Baja. Typical for the village are its many fields formed in terraces throughout the area. From Mirador Lomo Molino (sight point) you can see the entire north-coast up to the Anaga mountains, the Atlantic ocean and the volcano Teide. El Tanque derived its name by a huge artificial water reservoir (spanish: tanque) which was build during the 16th century to drain water to the sugar cane fields and to water the grape vines.

There are various hiking routes to the fascinating Teno mountains you can take from El Tanque alto. During these trips you will constantly recognize the islands volcanic heritage. From the upper parts of El Tanque you may take camel rides throught the great volcanic landscape and through the entire El Tanque area as well - a truly exotic experience!

The "Iglesia" church of the holy Antonius of Padua, Savior of the Poor and Sick, with its marvellous altarpiece of "Nuestra Señora del Buen Viaje", (the saviorine of the travellers).

"Casa de los Martelos" at the  Plaza de San Antonio in El Tanque bajo. It is one of the most important houses of the region which was erected in 1706. This house was one of the very few buildings (together with the old grain storage) which survived the volcano outbreak in 1706. The grain storage is also a "must-see". It was built in 1608 to secure nutrition during times of need. On the lower floor of the storage community meetings took place, as well as election for mayor and representatives. 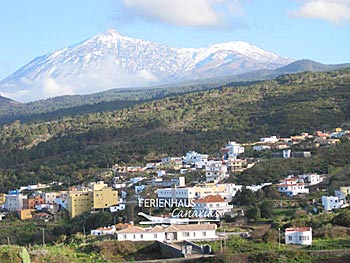 • Activities in the area of El Tanque:
- Hiking
- Centre of culture El Tanque with performances and exhibitions