The Teide is the fourth national park of the Canary Islands beside the Timanfaya in Lanzarote, the Garajonay in La Gomera and the Caldera de Taburiente in La Palma. Its fascination catches millions of people every year. The Teide Tenerife has a scenery on 20.000 ha, partly evergreen, multicoloured rocks and dark eruptive parts.

Dreamlike coloured sceneries remind you of strange planets beyond our sun system. The national park El Teide Tenerife even offers space for endemic animals and plants. They only exist in Tenerife and nowhere else on earth. The Teide sticks out of the gigantic Caldera - Canadas.

The Pico del Teide is active to this day and is almost four thousand meters high. This is how the national park El Teide got its name. The mountain was formed out of the hot lava from the heart of the earth. Its massif soared up from the deep sea of the Atlantic Ocean almost 7.500m high to form the scenery of the wonderful island Tenerife.

Even now the Teide is the feature of the "Island of eternal spring". With gigantic extent the fire-spitting Pico del Teide is only surpassed by the volcanos Mauna Loa and Mauna Kea in Hawaii. The inhabitants of Tenerife live with their mountain and appreciate its rumble. Striking and somewhat ironically they call the little craters next to it - Montaña Chahorra and Montaña Rajada - "Nose of Pico del Teide". With good reason was this impressive scenery of the national park El Teide  declared a world natural heritage by the UNESCO in 2007. 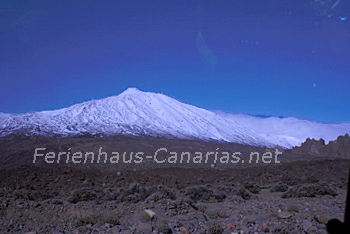 The first settlers of Tenerife, the Guanches, detected the possibilities of the slopes flooded with sunlight at the volcano even then.
According to the theory of the Norwegian globetrotter and researcher Thor Heyerdahl the native inhabitants were the architects of the stone pyramids. They used many expanses at the volcano as willows or for farming. Famous adventurers were admirers of the national park Teide Tenerife, among them Christoph Columbus. During his voyage 1492 he was a witness how the volcano broke out.

You won't get to know Tenerife, if you don't visit the national park Teide Tenerife. It is a touristic highlight that is well reachable and has an offer in store for every taste. For example the group of cliffs "Roques de García", the cleft in the rock "Cueva de los Cazadores" or the cave of ice "Cueva del Hielo". Sportsmen feel challenged by the alpin scenery for climbing, hang-gliding, mountain biking or jogging.
Excursions in the fabulous forest flooded with sun and full of exotic flowers and butterflys or bizarre lunar landscapes are going to fill nature lovers with enthusiasm.
Cultural offers and nature trails offer very interesting trip opportunities for families with children. Finally, there is the trip with the comfortable cable railway to the peak of the volcano Pico del Teide. From there you have a wonderful view of the green island with banana plantations and of the deep blue sea.

To spend the night in the Shelter Alta Vista at a height of 3.250m is worth it if you want to climb the peak the next day.

El Teide
to table of contents 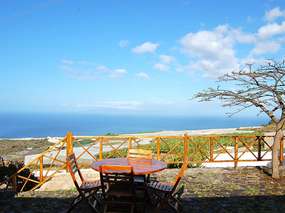