Holiday-makers in Tenerife don't have only the possibility to discover the surroundings but also to do activities. The time you spend with going to a restaurant, visiting sights, such as churches, or a day at the beach, should not end in disaster just because you don’t know certain manners which are usual in Tenerife.

The Spanish are very vivacious but also polite. They like to discuss and to spend their time together. Out of politeness, they hardly say “No!” when they know that the other person said something wrong. They offer another answer possibility. Example: When somebody claims that the Loro Park is in the South of Tenerife, you should say: “In the South? Or in the North?”

Many people don’t like it when others leave the house without being dressed well. Some people look askance at those who wear beachwear in a restaurant or while strolling into the town. Sometimes they aren’t even tolerated. In churches, your shoulders should always be covered and never wear shorts.

Bars and restaurants are like a second living room for the Spanish people. In the case that a friend takes you with him to such an evening, you shouldn’t have fear of contact. Body contact and a fast integration, also by strangers, are normal. The group won’t stay long at one place, but will move on. You won’t make friends when you divide the billing amount. It’s everyone’s turn. The people here in Tenerife like to invite each other.

There is one important rule in the restaurants in Tenerife. The guests wait for the waiter at the door. Don’t join strangers at their table and don’t ask if the seats are free. However, this rule is not valid for simple restaurants in the South of Tenerife, where mainly Germans eat. When you tell the waiter how many people you are, he will propose some tables and accompany you there.

The procedure of paying is also polite. The holiday-maker should ask for the bill incidentally. After it has been served on a small plate and the waiter has gone away, you put on money or your credit card. He will fetch the plate in order to give you back the change after a short time. Wait a few seconds until you take the remaining amount and leave a few coins as tip. The waiter will not fetch the plate until the guests are gone.

In the case that you like to discover Tenerife’s landscape, away from the tourist centres, you should take a phrase book with you in order to be able to know the most important words in Spanish. Men are always addressed as “Señor”, whereas only very old ladies are called “Señora”. When you speak to a woman, then better say “Señorita”.

There is naturism on Tenerife, nevertheless, it should be confined to the beaches that are slated for naturism, e. g. La Tejita near El Medano. In the meantime, „being topless“ at the beaches of Tenerife also became popular in touristic oriented places.

Valuable information
to table of contents 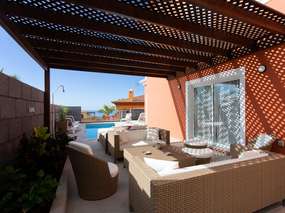