During a sailing trip in the Atlantic you can enjoy wonderful water, dreamlike views and pure nature

The volcanic island of Tenerife is the largest of the Canary Islands and is considered to be one of the most interesting island destinations for european tourists. The year-round milde climate attracts especially in the cold winter months of Central Europe many holiday-makers. Apart from the climate, it's the varied nature, the large variety of activities for tourists (sailing, climbing, sightseeing, nightlife...) and the pleasant atmosphere that enthral families, activity holiday-makers and sportsmen.
Active water sportsmen and especially fans of the sport sailing will enjoy their time in Tenerife. It's true that so many people don't know yet that Tenerife is a wonderful destination for sailers, but nevertheless it's very interesting.

It is very interesting because nowhere else the weather changes as often as on this Canary island, sometimes even several times a day. Those frequent changes, which can last a few days, are known in Tenerife. Its geographic location, as well as the volcano and the mountains, influence the climate. The climate change, that means particularly fast and unpredictable wind changes are perfect for sailing and surfing. There is also the fact that there are different climatic zones on the island. 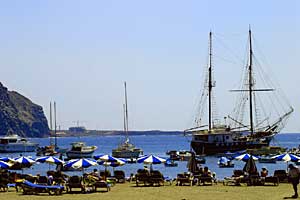 The water in the north is often described as "calm and predictable". Ideal for comfortable sailing trips with the family. It's a marvellous region with many possibilities to go ashore.
In the south, the sea is quite rough compared to the north. Especially the south-eastern part between Tenerife and the neighbouring island Gran Canaria should rather be chosen by advancers with the necessary experience. Not for nothing, it's termed as a paradise for sailing and surfing. This is emphasized by the numerous surfing and kiting competitions. The winds in "El Médano" are perfect for sailing, surfing and kiting.

No matter if you prefer the north or the south of Tenerife, sailors are delighted. Dreamlike beaches, untouched nature and wonderful water. Alone the wildlife is worth a trip. You can drift in calm water, watching the dolphins and wales. That makes the sailor's heart flutter.

The infrastructure emphasizes the fact that Tenerife has much to offer to fans of watersports. Numerous moorings enable the travellers to enjoy the diverse flora and fauna to the full.
One of the biggest marinas around the Canary Islands is the "Marina del Atlantico" in the capital Santa Cruz in the north-east of the island. Located in the middle of the noble part of the city, it is part of an impressive port area. With more than 400 moorings, there is access for almost every kind of boat.

Especially attractive for sailors is the diversity of the Canary Islands as a whole, so the neighbouring islands within sight offer an unbelievable variety for sailing trips. But that's not all! After sailing, you can enjoy all the other things, Tenerife has to offer. Culture, beach, nightlife, as well as excursions of all kinds make your holidays perfect.

"Playa de las Américas" in the south of the island is very popular with fans of bathing and swimming. The beaches are dreamlike, the hotel complexes extensive and inviting. Those who like to party and enjoy nightlife will also feel comfortable here. The tourist centre has been a favourite with revellers for a long time.

Maybe you prefer a peaceful, authentic place. In the tourist town of Puerto de la Cruz, south of the capital Santa Cruz, there is both international tourism and authenticity. Besides many hotels and shopping streets, you get to know the real life of the locals and their history. Tenerife combines modernity with culture and tourism in an impressive way.

Tenerife offers sailors all over the year a unique combination of landscape worth seeing and the possibility to practise their passion, as the "eternal spring" on the island makes it possible. And for those people, who don't whant to spent their nights in a cabin, there are comfortable apartments on the island.