For many people "Masca“ is a household 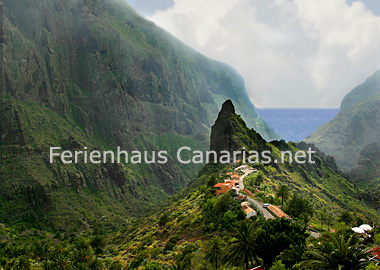 name because of the well-known and attractive landscape, but also due to the challenging hike to the Masca gorge, down to the sea.
Masca is a small mountain village in the Teno mountain range, about 650 metres above sea level with only about 100 inhabitants. Until 1960, this town was only reachable over a sandy track (from Santiago del Teide). Now there is a well-built but curvy mountain road which connects Masca with Santiago del Teide and Buenavista. The journey through Masca to Buenavista del Norte alone is worth a trip.

The region of Masca, which is located in a volcano’s crater, consists of several districts which are spread over different mountain slopes.
The Masca gorge tour starts in the lower town centre of Masca and leads through the gorge (Spanish: barranco) down to the sea (about 6 hours there and back).
It’s true that the tour of about 6-7 hours there and back (that depends on the fitness) is exhausting, but it is definitely worth it. The trail leads constantly downwards, sometimes softly and sometimes steeply. Among other things you will see gigantic basalt rocks and pebbles, and a small stream.
When you arrive at the sea, you will be rewarded with the untouched nature and the sound of the waves. The best thing is to have a picnic and to swim in the crystal clear water.

When you are fit, you can go back uphill. But most of the people decide to travel by boat to Los Gigantes and from there, by bus, back to Masca.
If you choose the second possibility, you should buy a ticket in advance and ask about the exact departure time of the boat. The third possibility is to go hiking in a guided group, in that case everything will be organized for you.