Anaga mountains in the north of Tenerife

A striking landmark with varied landscape: the Anaga mountains in the north of Tenerife. This massif reaches a height of about 1,000 metres. It is hardly populated and characterized by long rock formations and deep canyons. The Anaga mountains on Tenerife provide challenges of every difficulty level for hikers and climbers. Hikess with experiencing the unique flora of Mercedes forest as well as breathtaking views on Tenerife are the reward. You can also experience the impressive backdrop of Anaga mountains during a walk along the northern coast of Tenerife.

The northwestern side of the steep Anaga rocks is mainly characterized by laurels, ferns and lichens from Mercedes forest. The up to 30 metres high trees, overgrown with moss, thrive as lush as nowhere else in the world in the fog-shrouded Anaga mountains. Due to the humidity of the condensating trade clouds and the heat of the powerful alpine sun, subtropical conditions predominate. It is a tropical, exotic hiking area. Human settlements and even small terrace cultivation with orange trees can be found on the east side of Anaga mountains. They are accessible via adventurous, serpentine roads or along crests. Wandering through the most interesting hiking routes of the Mercedes forest takes at least one week, therefore it is advisable to rent a holiday house or holiday apartment in this region.

Popular hiking routes lead you through and to small municipalities, e. g. the villages Chamorga and Benijo. The remote cave village Chinamada explains the tradional way of living of the common people in the mountain region of Tenerife. The housing was cut into the rocks there. The place can be reached on an extensive hiking tour from Santa Cruz. The regional bus to the bus station Las Carboneras shortens the hiking time. An interesting hiking destination in the Anaga mountains is also the viewpoint Mirador Pico del Inglés with an impressive view over the gashed mountainscape.
There is a visitor centre (Centro de Visitantes) at the Mirador Cruz del Carmen, where the visitor gets information about the laurels of Tenerife and their meaning to the island. 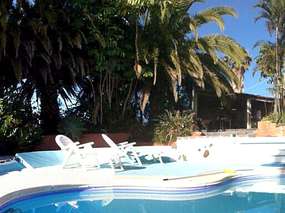 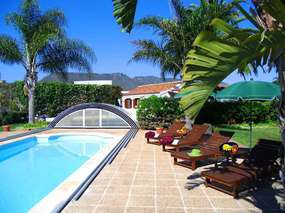