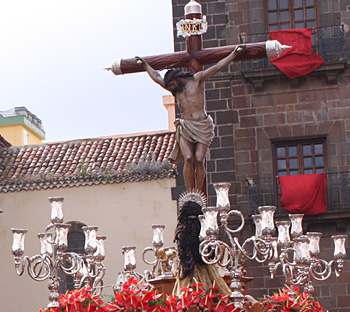 In Tenerife there are numerous festivals and processions with a Catholic background. The colorful spectacles impress not only through the fervor with which they are committed. At many celebrations, historically realistic scenes from the history of Christianity are presented. The processions of the Easter week, for example in Adeje in the south of the island, in which dozens of Canarios stage the crucifixion in historical costumes, are worth mentioning.

Among the most important festivals is the Feast of the Virgin of Candelaria, the patron saint of the Canary Islands. On the 14th of September, the cross-sculpture from San Cristóbal de La Laguna is at the focus. It represents Jesus' body, posture and facial expressions in a realistic way and belongs to the world cultural heritage. The Fiesta del Santísimo Cristo de La Laguna is not limited to one day, just like all festivals in Tenerife. Many events around the main holiday are held by all groups of the population, both young and old.

Creativity and jewelry play a major role in the outfitting of the old town of San Cristóbal de La Laguna in Tenerife. In September many facades of the city are decorated with flower arrangements. The colorful carpets on the streets of the old town, decorated with flowers, dyed salt, seeds and pieces of wood, celebrate the Corpus Christi at the Feast of Corpus Christi at the end of May. At the Fiestas del Santísimo the celebrations extend for about one week to the 14th of September. The image of the crucified Jesus is sent, at the 9th, from its place in the cathedral, on wandering. On the 14th it returns to the main procession, accompanied by a representative of the Spanish king. On the large square in front of the shrine, a deafening firework begins at the entrance. Many visitors and locals in Tenerife see it as the largest, most colorful and noisy fireworks of the truly not a few fireworks on the island.

The origin of the image of Jesus is not doubtless clarified, but some facts are undisputed. The focal point of the Fiesta del Santísimo Cristo de la Laguna in Tenerife is a in the gothic style carved sculpture. This style was applied in the Flemish region around the year 1500. The lively trading activity of the Dutch and Spanish crowns suggests that Jesus found the way to Tenerife via Barcelona and Seville. As a reason for the change of location two scenarios are assumed to be probable. The Spanish conqueror of Tenerife Alonso Fernández de Lugo belonged to the Christian brotherhood Veracruz, from whose Andalusian monastery shrine the Jesus image was brought in 1520. As an alternative explanation, the version prevails that the Duke of Medina Sidonia gave the valuable artifact de Luego.

A special feature is the realistic depiction of the Body of Christ. The eyes are open and the head of the sculpture is upright. Contrary to the widespread representations, Jesus is not fainted and depicted with a beautiful expressive face here. The proportions and physiological characteristics correspond to a strictly correct observation and implementation of a person from that time. The details reflect the features of the Israelite population, known then for high cheek bones and adlerases. The hair is curled.

According to the study of the scientist Francisco Galante Gomez the development is determined to 1500 or 1514, which is only a few years before reaching Tenerife. Gomez named the Belgian sculptor Louis Van Der Vule from the university as the creator. As a precise stylistic arrangement he described the Gothic style with an antique impact of the then Burgundian Netherlands. Clear is the younger age of the cross, which was exchanged only hundred years later. Until 1630 the Jesus sculpture was mounted on a simple wooden cross, which no longer exists today and can only be described by a few sketches and oral traditions. At the beginning of the twentieth century the Spanish king Alfonso XIII. declared the shrine of the Jesuit sculpture in Tenerife, the Santuario del Santisimo, to the royal décor. Thus, one of the first Christian sanctuaries in the Canaries got the status Real on 19 December 1906. Just a hundred years later, on November 22, 2006, the visit of the Spanish King Juan Carlos, together with Queen Sofia, confirmed the royal status. 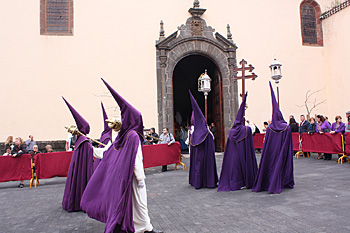 The Fiestas del Santísimo Cristo de la Laguna also moved into Tenerife and La Laguna at the same time as the image appeared. Together with the Virgin of Candelaria and the Virgin of Teror, it is still one of the most revered sacred representations on the Canary Islands. All Catholic churches, fraternities and orders, which were in power in Tenerife, celebrated the processions of the Fiesta del Santísimo Cristo de La Laguna. The cross, which was covered with silver plates, replaced the old simple wooden cross in 1630, after the power of the neighboring islands of La Gomera and El Hierro, Francisco Bautista Pereira de Lugo, gave it to the monastery in La Laguna.

Twice a year the Jesus image finds its way out of its shrine to the public of Tenerife. In Holy Week before Easter, it is placed on the throne of the procession and on Good Friday, by passing several churches trough the historical center to the cathedral. On September 9th, the painting takes the path from its shrine to the cathedral of La Laguna, where it remains visible for five days. During this time countless believers visit the picture. On September 14th, the highlights of homage are a mixture of military, religious and civil rituals, accompanying the Jesus on his way back to his homeland shrine. On the way the monasteries of Santa Clara de Assisi and the holy Katherina of Siena are visited. The end of the Fiesta del Santísimo Cristo de la Laguna is the firework, which announces the arrival of the image on its altar loudly.

The veil of Christ and his miracles 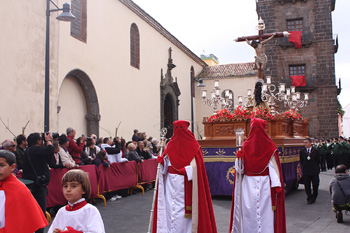 Almost as old as the image of Jesus of Nazareth is the veil of Christ, dated before the year 1599, without a more accurate statement. The veil of damasks contains the Christian cross and the signet of the papal pontificate. At the Fiesta del Santísimo Cristo de la Laguna in Tenerife, the veil is also acknowledged, which is blamed for some special incidents and miracles. Thus he was supposed to have prevented the feared attack by the Lutheran Dutchmen who landed on Gran Canaria the day before his appearance. From there, the silk scarf was transferred to La Laguna, where in July 1810 it performed its second miracle.

In 1921 and 1922, a group of military mountain troops from Tenerife moved to the coast of Morocco in the battle. The Patronage for the 160 men strong unit took over the Jesus of La Laguna. After 17 battles, the entire battery returns to Tenerife safely and without losses. The intactness was attributed to the Christ of La Laguna as another miracle. The artillery promised solemnly to participate in every procession of the fiestas del Santísimo Cristo de La Laguna, expressing the love and faith that they felt for this miracle.

The Easter Festival and the Fiestas del Santísimo 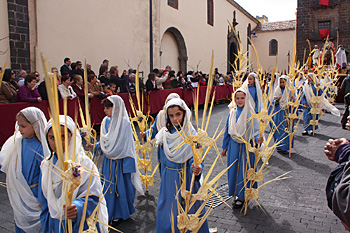 During Easter, the Jesus of La Laguna experiences great appreciation. Apart from the September procession at the Fiesta del Santísimo Cristo de La Laguna, it is the second major event of the year. In the Holy Week, the image visits two monasteries and many temples in the center of La Laguna. There the seven words are recited, which were spoken as last words in the crucifixion of Jesus. After hours of atonement, the path continues to the cathedral. At the end of the procession, the image leaves the cathedral on the afternoon of Good Friday and is returned to its altar in its shrine.

El Cristo de La Laguna and the Virgin of Candelaria 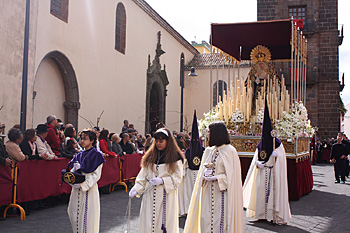 The many emigrants from Tenerife who found a new home in Latin America, took images of both the Jesus image and the Virgin of Candelaria into their new world. Many representations of the two saints were based on the Canarian originals and so it is that in the Caribbean, Mexico and other countries of South and Central America, surprisingly similar representations of the two saints can be found. Further images of Jesus are to be found in other places in the Canaries. In Gran Canaria, Telde is the sister town of La Laguna, and there is also a shrine in the basilica, which can not deny the similarity to the one in Tenerife.

Besides the miracles and legends, the two religious sanctuaries in Tenerife are also linked by their exceptional artistic quality. There is a high-quality antique oil painting of the Virgin of Candelaria in the shrine "Real Santuario del Santissimo Cristo de La Laguna" of Jesus. Conversely, a valuable and also antique image of the Christ in the Shrine of the Virgin of Candelaria "Real Basilica de Nuestra Senora de al Candelaria" can be found.

Two years ago, the first major restoration of the Christ image from Tenerife was completed. From November 2011 to March 2012 specialists from the Institute for Art of World Cultural Heritage in Brussels improved some damage and missing parts of the Jesus image. Cracks in the wood had to be closed, some parts of the crown were missing and had to be replaced and even a few fingers were put back. The biggest challenge was the stopping of the darkening of the picture, which was created by an almond oil coating as rain protection. The rain-protecting layer strongly attracted the dirt from the several hundred-year-old story and sticked on the surface.

After the careful and thorough cleaning with the most modern methods, the colors changed to the brighter, which particularly affected the skin tone of the Jesus. The result was strongly controversial among the faithful, and they expressed some great displeasure about the "new" appearance. It was only the growing tales of older people who still knew the Christ with a brighter skin that reassured the critics.

Sights
to table of contents 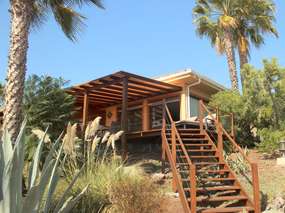 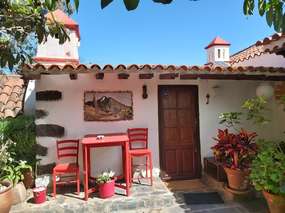