Tenerife between colonialism and modernity

Power struggles of the discoverers

The strategic location of Tenerife and natural beauty of the island made a plaything of political intentions. One Thousand years after the Phoenicians, around the year 100 after the era the Roman Empire were also interested in Tenerife. This was verified by the scripts of the roman annalist Ptolemaist. Pirates and seafarer in service for England, Netherlands, France and also the Iberian ruler in Portugal and Spain would like to have the claimed to power enforces of the European Royalty on the territory of the Canary Islands. The aboriginal wants to be independent amongst others in the battles La Matanza. In these one the Guanchens laid a legendary victory against the Spanish conqueror. The resilience of Tenerife's inhabitants is marked with the cannon called "Tiger" which takes place in Santa Cruz. While attempting to conquer the Spanish Island, which already was occupied, for the British crown the known English Fleet Admiral Lord Nelson lost through these cannon an arm.

Despite of all the resistance, Tenerife became from 1495 a Spanish colonial territory. It comes to a Christianization of the Guanchens and also to a cease of the aboriginals. All conquerors were keen about the beauty of the island. But they used the island as a emporium and also for the transport from slaves. Eventually the island was mention in the logbooks of historic Explorer.Christoph Columbus explained the volcanic eruption of the volcano el Teide, which he could hear from a distance by his expedition to America. The German naturalist Alexander von Humboldt visits the Island of the everlasting springtime, while his expedition. He pries about Natural beauty of the island.

Despite of own administration Tenerife is now part of Spanish territory. Since the 1960s developed the largest island of the archipelago into one of the world's most popular destinations with accommodations of all kinds, from luxury hotels to private holiday apartments or holiday fincas. While the red dye extraction for the cosmetic industry from a louse art today hardly plays any role in the trade of the island, are currently exported large quantities of bananas, vegetables and exotic flowers from the island in many countries. The sloping to great depths in the ocean ports of the island allows brisk cargo ship traffic. In addition, the island stands for ecological projects using alternative energy and for futuristic projects. Tenerife is also known for colorful art scene. Increasingly, the delicate, sun-kissed wines of Tenerife with its own seal of quality demanded for luxury in the world. 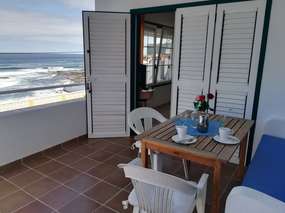 Punta de Hidalgo | Sea view Apt.
OKWe use cookies on this site to enhance your user experience. By continuing to browse this site you are giving your consent for us to set cookies. » Privacy Policy